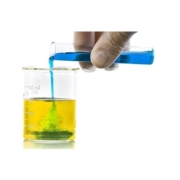 The easiest method by which alcohols can be used in diesel engines is in the form of blends. For lower alcohols, this approach is limited to ethanol because methanol is not soluble or has very limited solubility in the diesel fuel.

An advantage of ethanol±diesel fuel solutions is that few major component changes are required for their use. Small adjustments to the injection timing and fuel delivery may be necessary to restore full power. The adjustments depend on the ethanol concentration and the combustion effects of ethanol.

Czerwinski tested a 4-cylinder, heavy duty, direct injection diesel engine in which 30% ethanol and 15% rape oil mixtures were used. He found that the addition of 30% ethanol to the diesel fuel causes longer ignition delay. The combustion temperatures were lower. At full load, all emissions were lower. At lower loads and speeds, CO and HC emissions were increased. It was possible to obtain emissions similar to diesel fuel, but with reduced power output up to 12.5%. Concerned with alcohol fumigation.

Lestz applied ethanol fumigation to a 5.7 I, V-8, light duty, indirect injection diesel engine by using a pressurized nitrogen cylinder with secondary air supply in amounts up to 50% of the total fuel energy. Their research was undertaken to study the effect of ethanol fumigation on the performance (efficiency), combustion knock characteristics and exhaust emissions. For all conditions except the 1/4 rack setting (light load) condition, modest thermal efficiency gains were observed upon fumigation. However, engine roughness or the occurrence of severe knock limited the maximum amount of ethanol that could be fumigated.

Brake specific NOx concentrations were found to decrease for all conditions tested. While decreasing the mass of particulate emitted, ethanol fumigation enhanced the biological activity of that particulate.

Hayes tested 100, 125, 150, 175 and 200 proof ethanol as fumigants in a 6-cylinder turbocharger diesel engine at 2400 rpm. Ethanol was injected directly into the intake ports. Six electronic fuel injectors were used, one for each cylinder. They found that the lower proofs reduced the maximum rate of pressure rise. Any proof at lower load reduced NO levels. HC emissions increased greatly as the ethanol substitution was increased without depending on the ethanol proof. It can be seen from the literature survey reviewed earlier that there is a lack of information about comparison of alcohols fumigation with alcohols as blends with diesel fuel, and there is M.

no detailed information about the effects of alcohols on diesel engine smoke or particulate matter emissions. Since the comparison between these two methods needs a base to start from our base was using ethanol percentages as a fraction of the diesel energy input at full rack setting. These percentages are to be supplied to the engine while keeping the total fuel energy constant as obtained from diesel fuel operation at full rack setting. This could be achieved through constructing an effective simple fumigation technique.

slight improvement in the efficiency with increasing ethanol substitution. This improvement was approximately 7.5 and 5.4% over the entire speed range for ethanol fumigation and ethanol±diesel fuel blends, respectively. It can be seen from this figure that ethanol has the same effect at all speeds. The maximum increase in the efficiency was at 1500 rpm. The improvement in the thermal efficiency is attributed to the changes occurring in the combustion process. The physical and chemical differences in fuel structure of ethanol and diesel fuel lead to a combination of changes in the combustion process. In general, the slight gains in thermal efficiency with increased ethanol substitution may be attributed to the increase in the ignition delay, so a rapid rate of energy is released which reduces the heat loss from the engine because there is not enough time for this heat to leave the cylinder through heat transfer to the coolant. The blended fuels compared least favorably with fumigation at all speeds and approach the diesel fuel in some cases. This could be due to the following reasons:

This article is to study and compare the effects of ethanol fumigation and ethanol±diesel fuel blends on the performance (efficiency) and exhaust emissions of a diesel engine. This was achieved by using a simple fumigation technique and a new method of introducing ethanol percentages. The conclusions which may be drawn from this study are as follows:

The use of 20% ethanol as a fumigant can produce an increase of 7.5% in the brake thermal efficiency, 55% in CO emissions levels and 36% in HC emissions levels. Also, this fumigation percentage produces a decrease of 48% in engine smoke and 51% in soot mass concentration.

What is diesel generator and how to collect a genset