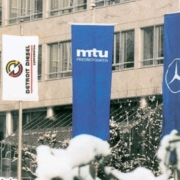 For 25 years, mtu Series 2000 and 4000 engines have been setting the pace in the off-highway segment.

From the first turn of their crankshafts, they have been trendsetters – and remain so to this day. Run on sustainable fuels, they will soon be producing the ‘net-zero’ power that matters.

When the curtain lifted on the mtu Series 2000 and Series 4000 25 years ago, the world was a very different place. Bill Clinton was US President, Damon Hill became Formula 1 World Champion, the horror film “Scream” was attracting millions to the box office – and engine emission standards were still unheard of. All the more astonishing, then, that the mtu Series 2000 and 4000 are still setting trends today. “These engines not only represent a major part of our past, they’re also a key to the future of our company: Teamed with electric motors and batteries to create hybrid systems, and powered by sustainable fuels, they are going to be setting standards in off-highway drive trains for a long time to come,” said Andreas Schell, CEO of Rolls-Royce Power Systems.

Let’s go back to 1996, or actually a few years before that. 1992 saw growing collaboration between two companies, they could hardly have been more different: MTU Friedrichshafen and the Detroit Diesel Corporation. At the time, MTU Friedrichshafen was concentrating mainly on doing business with government agencies, i.e. customs, police, border guards and the military, whose budgets were shrinking at the time. As if that weren’t enough of a challenge, globalization was also taking its toll on the diesel engine sector. To continue to grow, the company simply had to change, as internationally oriented suppliers with broad product ranges stood a much better chance on world markets. The Detroit Diesel Corporation (DDC) already had this transition behind it and was familiar with all the relevant legislation. Low operating costs, short delivery times and easy-to-maintain engines were all crucial factors.

The two companies decided to work together on developing two new engine series. In September 1994, they signed a collaboration agreement to develop and produce the Series 2000 and the Series 4000, with the mtu employee newsletter at the time quoting management as saying, “Probably the biggest problem is that DDC is showing us all too starkly what conditions prevail on the commercial market.” People knew things had to change, but the change that came was radical – for employees in Germany and the US alike. Georg Ruetz, the new series’ chief design engineer at the time, still has vivid memories of the engine development work which also saw the start of the R&D partnership with what was then still known as Detroit Diesel: “Of course, we had to get used to each other and find common ground. In terms of approach and mindset, the companies were like chalk and cheese. But together we managed to develop two engine series that have been setting the standards for decades, and that’s something to be proud of.”

Just how groundbreaking these engines were was something many realized only years later. The Series 4000 was the world’s first off-highway diesel to feature common rail fuel injection. “We were really leading the way with this development for large high-speed diesel engines, and were even ahead of the automotive industry,” said Ruetz. This new technology improved combustion in such a way that developers were able to set ideal states throughout the engine map. The start, quantity and rate of injection can all be regulated by an electronic engine control unit. Compared to previous systems, a significantly higher injection pressure is achieved, especially at low engine speeds, enabling really low particulate emissions. Today, the system is now in its fourth generation with the next generation already in the pipeline.

Increasingly stringent limits on pollutant emissions were the driving force behind the development of the Series 2000 and 4000. Both the US Environmental Protection Agency (EPA) and the European Union began specifying limits for particulate and nitrogen oxide emissions, and engineers had to rise to the challenge. The limits vary depending on application and country of use: Sometimes the engine is only allowed to emit particularly low levels of nitrogen oxides, and sometimes the focus is on reducing diesel particulate (or both). “We’re constantly enhancing these engines, and if you look at a Series 4000 or Series 2000 engine today, we’ve redesigned most of the components to meet the higher requirements in terms of power, consumption and emissions,” said Otto Bücheler, who now heads up development of Series 4000 marine engines. Nevertheless, the engines have retained their typical look and external dimensions, because one thing has always been important to the engineers: The appearance of the engines, and thus the interfaces to customer applications, were to change as little as possible to enable older vehicles to be repowered with new engines.

Engines for all seasons

For a long time, the Series 4000 in particular was unique – the genuine article which was an enduring thorn in the flesh of our competitors. “Without wishing to sound pretentious, I’d say the engine truly was ‘the genuine article’ – often copied, but still unmatched,” said Georg Ruetz with conviction.

What makes the engine unique to this day is its sheer versatility. It is used in generator sets for generating electricity and in haul trucks, luxury yachts and locomotives. The Series 2000 also has a lot going for it, including its wide range of potential uses. Like its big brother, it powers yachts, ferries, construction site vehicles, haul trucks and gensets – only with lower power ratings. The Series 4000 is available with 8, 12, 16 or 20 cylinders, and with power outputs ranging from 720 to 4,300 kW. The Series 2000 is available in 8, 10, 12, 16 or 18-cylinder configurations, and with power outputs ranging from 452 to 1,939 kW. The two engines share a common platform which allows them to be configured easily for their respective applications.

The diesel that’s also a gas

The gas-powered version of the Series 4000 was launched just three years after the diesel – as a stationary engine for power generation. The gas-powered Series 4000 made its début as a mobile engine on 1 July 2020. Since then, it’s been powering two ferries in the Netherlands run by operator Doeksen. The mtu gas engines come in considerably below the limits imposed by current emission standards (IMO III) even without exhaust gas aftertreatment – indeed particulate mass is below detectable levels. They emit zero sulfur oxide and only minor quantities of nitrogen oxides.