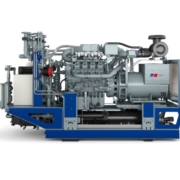 Comparing two gensets are not very completed while we are not trying to find any winner and loser. Diesel generator and gas generator both have compensations in different applications and situations. We are naming different advantages of each in this article.

• The three most obvious pros of using natural gas as a fuel to power your generators is that it is cleaner, less expensive than other non-renewable fuels, and is considerably efficient.

• In comparison to oil and coal, the emissions of sulfur, nitrogen, and carbon dioxide (a greenhouse gas) are considerably lower. Hence, natural gas is one of the cleanest fossil fuels when it burns.

• Another advantage of natural gas generators is that natural gas does not produce a pungent odor, which is fairly common in generators powered by oil or diesel.

• Natural gas generators are also effective in reducing costs when used to power homes. This is because electricity from the main utility source is a far more expensive alternative.

• Apart from being cleaner and cheaper, natural gas is also readily available in large cities since it is delivered directly through pipelines. Hence, when using natural gas powered generators, storage of fuel becomes redundant.

• When it comes to the cons of natural gas generators, one of its advantages can also be regarded as a disadvantage. Since natural gas need not be stored as it is supplied through gas pipelines, at times of natural calamities the supply of natural gas is disrupted. You may find yourself facing a lack of fuel when you need to operate your generator the most.

• Apart from this, natural gas is extremely explosive and can be a serious fire hazard should the pipeline burst.

• In comparison to diesel generators, natural gas generators are:

– More expensive to run
– Emit more carbon dioxide, which is a greenhouse gas.

• Moreover, natural gas is a limited or non-renewable energy resource.

• In present times, when it comes to making choices regarding fuel, the most important factor is price. With the constantly increasing demand and steadily decreasing supply, fuel choice has become the most debated topic in almost every sphere. The key is to find a fuel that is cost effective as well as energy efficient. In this regard, diesel generators score high. While they are a considerably more expensive alternative in comparison to natural gas generators, since the price of diesel is more than that of gas, diesel has a higher energy density. In other words, while you may pay more for the diesel, you will also get more energy out of the diesel than you would for the same volume of gas. Hence, fuel efficiency is by far the single most important advantage of diesel generators.

• Another big benefit of installing a diesel generator is the assurance of a steady power supply. In establishments such as hospitals, this plays a significant role because most of the machines used require constant power and one power outage could mean the difference between life and death.

• In comparison to a generator powered by gasoline, the diesel generator is far more efficient for several reasons as follows:

– Diesel engines that are presently used are much-improved versions of earlier models that       were a nuisance due to high noise and heavy maintenance.

– Diesel engines are much more sturdy and reliable.

– Another big advantage over gas engines is that diesel engines do not require spark plugs or wires; this helps in reducing maintenance costs.

– The lifespan of a gas engine is much shorter than that of a diesel engine.

– Finally, being less flammable than other fuel sources, diesel generators also score high on the safety front. Moreover, again the absence of spark plugs eliminates the risk of freak fires.

• Noise has always been an issue with regard to diesel generators. While the newer models are designed to be quieter, the older variants can still be considerably noisy. This means that if the generator is being used in areas that are heavily populated, residents may complain of noise pollution from your generator unit.

For applications where more kW are required, power producers can create parallel configurations of smaller engines to provide them with the cumulative kW needed for the operation. Parallel systems have the advantage of supporting load sharing and management, making them one of the most cost-effective and environmentally friendly options, in terms of fuel use, for variable load applications such as mini-grids. Add to this savings the reliability and scalability of parallel systems where they replace a single, larger diesel generator (such as for backup power) and the benefits of such a solution are considerable.

For the past two years, natural gas genset suppliers have also been touting fuel prices as cost benefit. While the fall in natural gas prices is certainly making them a more attractive option, plummeting oil prices are having a similar effect on diesel generator fuel. We won’t make a prediction here, because the outcome of fuel prices is anyone’s guess.

One of the big advantages of natural gas, of course, is that it burns more cleanly than diesel. This comparison is exacerbated for any of the operating conditions mentioned in the previous section, where wasted fuel increases soot and dangerous emissions.

In addition, shortened engine life from wet stacking, light loads, inadequate maintenance and other common diesel generator issues can negatively impact emissions even more. This can be an problem, not only for the environment, but also for regulatory compliance with the EPA and other agencies that protect it.

Engine maintenance and condition monitoring must be verified through reporting, and if operators allow engines to fall outside acceptable ranges with poor maintenance or fuel conditioning, steep fines can result. The fines for not keeping an engine in optimal running condition can quickly eclipse the added cost of a natural gas model. Consequently, firms should consider all of these factors before they make an engine choice.

Fuel handling is another area where diesel gensets and natural gas generators are not converging.

As with other criteria, the benefit of one over another often depend upon the situation and need.

For example, it is widely promoted that natural gas delivered from a pipeline can run a generator indefinitely in the case of a disaster. This is true in most situations, but there are caveats. It’s fairly evident that any natural disaster that disrupts the earth, such as an earthquake, can cause supply disruption.

Of greater surprise to many enterprises, weather-related events such as hurricanes and tornadoes can cause damage to buildings that disrupts their natural gas lines.

This in turn can impact gas pressure in the surrounding area or even force a utility to shut the gas supply off.

Any power provider considering a natural gas genset as a backup power supply to keep utility offices running in the event of storm or for other reasons should be aware of these possibilities.

For diesel, fuel availability is limited only by delivery frequency. If diesel trucks can service a site, then fuel supply is no problem.

However, in remote locations that use generators for backup or prime power, weather can factor into fuel delivery, as well.

For remote locations that cannot easily undertake routine fuel sampling and cleaning, automatic fuel polishers, which consist of a pump and filtration system, can be incorporated into a diesel genset.